Byron LaDue in "The Zoo Story" 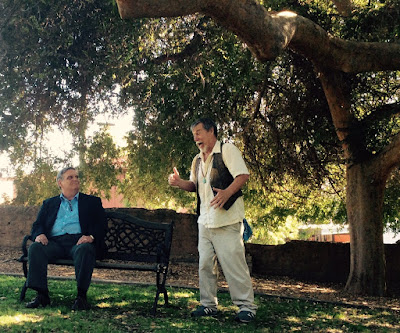 Our next discussion "What's Camus Got To Do With It?" has been postponed until early 2018, but we have another fitting suggestion.

Instead of our regular meeting in Pan's Garden (undergoing a massive renovation) we have something very special to offer you this month:
A fine production of Albee's The Zoo Story, starring our own Byron LaDue!

The Zoo Story Performances Saturday and Sunday only at 2 pm:

Edward Albee's first play is celebrating its 60th anniversary next year, and San Diego Actors Theatre is marking the event early with an outstanding production, running for only two more weekends, Saturday and Sunday at 2 pm, in a lovely (and shaded) outdoor setting in Pioneer Park in Mission Hills. The foremost American playwright and winner of numerous Pulitzer and Tony awards, Albee's writings are frank examinations of the modern condition, much like Kafka, and Camus. His early works reflect a mastery in the Theatre of the Absurd, echoing Camus' influence. And like Kafka, Albee wanted his unpublished works destroyed
after his death.

Our favorite Kafka reader, Byron LaDue, is receiving rave reviews for his portrayal of Jerry, one of Albee's most unusual and enduring characters. Here's what theatre critic Pat Launer wrote:  "In perhaps the finest performance I’ve seen from him, LaDue at first appears to be reasonable, if a bit eccentric and loquacious, a harmless drifter. But he becomes increasingly menacing, and frightening."

Our next regular Coffee with Kafka will focus on the similarites and differences surrounding our man Kafka and Albert Camus, a French philosopher and author whose writings gave rise to Absurdism.

With Albee's literary connections to both Kafka and Camus, this production will no doubt "play" into our next discussion, to be scheduled at a future date.

In the meanwhile, don't miss a riveting 70 minute site-specific production of The Zoo Story, with four more Saturday and Sunday performances, November 4 and 5 and November 10 and 11 at 2pm in a lovely setting in Mission Hill's Pioneer Park.

Our last event was: