"Investigations of a Dog" - Arthur's story

"Investigations of a Dog" 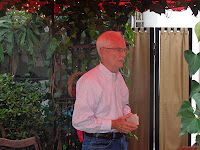 I like “Investigations of a Dog” most of all of Kafka’s stories, even “Metamorphosis,” where Gregor Samsa is torn out of a concrete situation and plunged into a conflict with the universal sphere, whereas the dog is encompassed by the universal sphere from the outset. JUST LIKE US.
This allegory of Kafka’s life reminds us of Plato’s Cave in “The Republic,” where humans are chained to the floor on their backs, facing the light; behind them is a huge fire and between the supine and the fire, people walk back and forth and the indigent can only see shadows.
As individuals are released from bondage, the real world seems unreal and the shadow world still seems real. After adjusting to the light, some begin their journey upwards- the ascent of the soul to the intellectual world. After much effort, the idea of the Good appears. It is the universal author of all things beautiful and right, the source of reason and truth.
Unfortunately, our hero conjures up the seven singing dogs who are no more helpful than his entire dog culture in answering the basic questions of existence. Chief dog is able to discover how to make food available by fasting and incantations. Sadly, even after therapy by the hound and fasting, our dog is only able to ascend a few rungs on the knowledge ladder to enjoy freedom; however, as dog says, “Certainly such freedom as is possible today is a wretched business.”
And by this Kafka means there has been a rupture between faith and reason and between religion and science that has run through our civilization since Descartes (1600 to 1660), the father of philosophy who introduced rationalism to the modern era. Add to this, Kafka’s scarred existence under his father, who told Kafka his writing was worthless.
Kafka had trouble finishing anything because he knew the endings would be unhappy. He implored Max Brod, his best friend and editor, to burn all of his unpublished work. He did not. Dora, with whom he lived his last year, while dying of tuberculosis, did burn some of his diaries and stories.
Ironically, Kafka has had an enormous influence on those who came after him because he was not just a philosopher but a philosopher-poet, whose fiction best illustrates his philosophy. Other of his works I recommend are his two short parables, “The Burrow,” “A Country Doctor,” “The Hunger Artist,” and “A Wedding Preparation.”
“If you have not read “The Investgations of Dog” I would default to a twelve line poem, “What’s Like…” about my singing dog, Nicki.

My dog’s licking the raindrops
Running down the outside pane?
Man’s thirsting for the afterlife;
The left-behind will remain.

Is it really out of reach
Despite all of God’s teasing?
No liturgy can breach the gap
No matter how God-pleasing.

Now that Nature’s stopped the rain,
Nicki’s short-lived rapture
Gives us insight into just how hard
It is for God to capture.